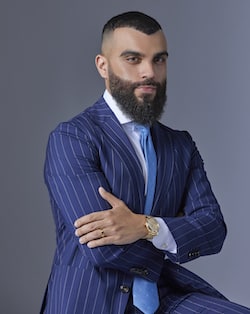 Attorney Matthew Barhoma, founder of Barhoma Law, P.C., is a renowned criminal appeals and corporate lawyer in California. Mr. Barhoma graduated from University of California, Irvine and completed his legal studies at California Western School of Law. Mr. Barhoma has consistently been top rated by the American Associations of Attorney Advocates, Avvo, Justia, Esquire'd, and more. Mr. Barhoma has developed a reputation for being one of California's most outstanding post-conviction and corporate litigation/courtroom lawyers.

Mr. Barhoma has achieved immense success on multiple cases in appellate and post-conviction. Each are respectively highlighted below:

Mr. Barhoma successfully resentenced a number of individuals and has achieved great success on Writs of Habeas Corpus, Direct Appeals, SB 1437 petitions, AB 2942 applications, 1170(d)(1) petitions, and commutations of sentence applications. Mr. Barhoma has made hundreds of appearances in both appellate and trial level courts. Having achieved such great success in post conviction, appellate, and trial work, Mr. Barhoma has crafted a strong reputation.

In 2019, Mr. Barhoma won two SB 1437 and was successful in vacating the sentence of people convicted of homicide unjustly. In 2021, Mr. Barhoma was successful at getting a client's application recommended for commutation by the governor. In 2022, Mr. Barhoma led a client through recalling and renegotiating on his sentence in a televised court appearance. The client was very likely wrongfully convicted. Due to Mr. Barhoma's work on that matter, the Los Angeles County District Attorney's office employed a re-entry specialist with multiple decades of experience.

Innocent Barhoma Law clients wrongfully accused of murder and other crimes are now free because of Mr. Barhoma's work.

Mr. Barhoma has experience great success in criminal trial and appellate courts. Having appeals experience further enables Mr. Barhoma to take a matter through litigation at the trial level, all the way through the appellate track. Mr. Barhoma has crafted a name for himself as one of California's most renowned courtroom attorneys.

Mr. Barhoma is consistently rated the best appeals and courtroom lawyer by various agencies. Mr. Barhoma is diligent in his drafting practices; he tracks how specific judicial officers rule, picking up on any special trends the judicial body enforces. Further, Mr. Barhoma uses that information in zealously advocating for his clients.

Having achieved such tremendous success in both criminal appeals, post-conviction representations, and corporate litigation, Mr. Barhoma offers the full range of his services using Barhoma Law, P.C. to consult with us, please call us at (213) 800-7664.