Barhoma Law, P.C., is a renowned California Criminal Appeals and Los Angeles Corporate firm. We are consistently top-rated in Criminal Appeals in California according to multiple agencies, such as American Association of Attorney Advocates, Justia, Esquire’d, Avvo, and more.

As post-conviction lawyers, we represent those wrongfully convicted in:

We are renowned in the appeals and post-conviction arena with immense success in the practice area. Our team freed a wrongfully convicted defendant who was proven to have never even been at the scene. We were successful in demonstrating his innocence through new and additional evidence. We also vacated a 20 + year conviction within six months of representation by succeeding under SB 1437. Matthew Barhoma, founder of Barhoma Law, has built a reputation for bringing highly successful Writs of Habeas Corpus at both the state and federal levels, with major arguments like actual innocence, ineffective assistance of counsel, and more.

On the corporate side, Mr. Barhoma has built a reputation for being a strong defense litigator. In 2018, Mr. Barhoma successfully defended against a $2,500,000.00 claim between international companies. Among the claims were Fraud, Breach of Contract, Misrepresentation and Deceit, and more. We have built a strong reputation for being one of Los Angeles’ best corporate and business litigators. Mr. Barhoma successfully defended a cemetery in a jury trial, where our client was being sued for fraud, unjust enrichment, deceit, breach of contract, breach of fiduciary duty and more. Lastly, we are successful in a 2019/2020 matter where our client is being sued for a laundry list of alleged fraud matters. In that case, we have successfully blocked the plaintiff’s path to litigating the matter and have barred any and all claims—a ruling that is strongly in favor of our client. Mr. Barhoma was able to achieve this through strategic approach using the California Rules of Civil Procedure, Res Judicata (Claim preclusion) and principles of Summary Judgment.

Direct appeals are among the strongest and best legal maneuvers post-conviction. First, Barhoma Law looks to determine whether you filed your Notice of Appeal timely. Failure to timely file a notice of appeal will result in an automatic loss of your appeal. Then, Barhoma Law orders and prepares the record. From there, we extensively go through the record and draft and file your opening brief. The prosecutor will have an opportunity to file their response. Once Barhoma Law receives the prosecutor’s brief, we then extensively review it, draft and file a reply brief. And then we prepare for oral arguments in the court of appeals. This process takes skill and tedious attention to detail. You can seek many great arguments on appeal to overturn your conviction, including the ineffective assistance of counsel, actual innocence, jury tampering issues, prosecutorial misconduct, and many more described in detail here.

A Writ of Habeas Corpus is a Latin term which stands for “production of the body.” We represent defendants in bringing their Writ of Habeas Corpus if they are unjustly or wrongfully detained or incarcerated. This gives you a legal means to challenge the legal basis of your imprisonment, the duration and length of your imprison, or even the manner in which you are imprisoned.

Alternatively, at Barhoma Law, we review your record extensively to determine the best likelihood of success to reduce your sentence. We do this in a number of ways:

Barhoma Law is known for its fierce and rigorous litigation style. We have defended among the strongest claims and won, time and time again. We have successfully defended again Intentional Misrepresentation, Negligence Misrepresentation and Fraud, Unfair Business Practices, Concealment and Deceit, Conversion, Breach of Fiduciary Duty, Breach of Contract claims and more. And in almost every instance, we either achieved a verdict in favor of our client or we barred further litigation by Plaintiff by way of Summary Judgment or claim preclusion. Sometimes, the stakes are high and you cannot risk it. And when the stakes are high, Barhoma Law is known to perform. Being on the defending side of high stakes litigation, there is a level of rigor we are all too familiar with.

We use technology to strategize from researching the judge and judicial trends in rulings, and to considering the propensities of the parties to achieve strategy. We approach every litigation with strategy to maximize the likelihood of success in favor of our clients. You can consult with us for your Business needs at (213) 800-7664.

Just as strong as Barhoma Law is in the courtroom, Barhoma Law is just as strong on the transactional side. More, currently we are out-house general counsel to a California Pharma company. We have facilitated an asset and stock purchase of a medical entity. We are robust and strategic in finalizing multimillion-dollar high stake transactions.

Mr. Barhoma is a founder of a legal-technology company and understands what it takes to be a business owner. Negotiating, drafting, and finalizing licensing agreements, royalty deals, services agreements, and more is another major skill for Barhoma Law.

Results and Reputation of Success

Barhoma Law has a strong reputation for success. Below is a brief highlight of recent notable successes:

If you are seeking a California Criminal Appeals attorney, contact Barhoma Law today. You can call us for a free consultation at (213) 800-7664. 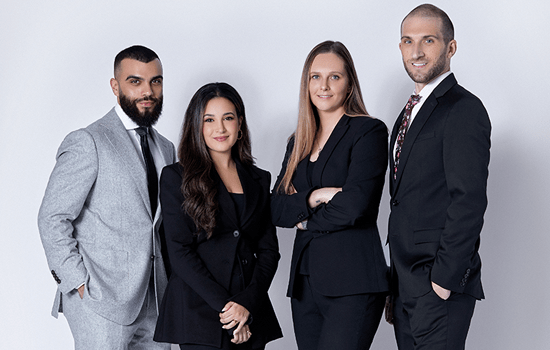 Barhoma Law, P.C. is a dedicated Appellate and Post-Conviction team with a specific interest in overturning convictions, especially for those wrongfully convicted. Our criminal appellate team has deep knowledge of current laws and the rapidly changing laws and legislative trends. Our team includes lawyers, legal researchers, paralegals, staff members, and more, dedicated to handling your case promptly and efficiently.

The Barhoma Law, P.C. team review cases in search for the truth, our team of lawyers look for shortcomings made or may have been overlooked, and we advocate zealously for our clients.

If you or a loved one have been wrongfully convicted, or there are genuine issues regarding their conviction or sentence, reach out for a consultation with Barhoma Law, P.C. Let us analyze your case and help you strategize for the next steps in your case.

The article highlights a recent success for Barhoma Law, P.C., where the Firm successfully reduced a client’s sentence just mere 9 months after retaining the Firm. Our client, Mr. Earl Snoddy, spent the last 27-years behind bars for a crime he likely did not commit. The Firm filed a conviction integrity request. In addition, Mr. Snoddy, through his counsel, sought to recall and renegotiate on the sentence by submitting an AB 2942 / Penal Code § 1170(d)(1) petition.

View More
SB 1437 Successful Case, 2019
SB 1437 Successful Case, 2019
Federal Writ of Habeas Corpus Gained Key Ruling
$2.5M Breach of Contract Claim Successfully Defended Against
Application for Commutation of Sentence Granted 2021
Videos
View More
Client Reviews
★★★★★
"Matthew is the most knowledgeable lawyer. I have worked with teams of lawyers and none of them were as knowledgeable and prompt as Matthew. I trust all of my company’s legal affairs with Matthew. He makes me rest easy knowing he is on it.” Michael
★★★★★
"Matthew is the epitome of hard work and dedication, when it comes to his work. Matthew has helped me with all my contractual work needed to help me launch my start up. Matthew is honest, diligent and relentless." Carol
★★★★★
"Matthew was very responsive and caring for my case. He handled my case with efficiency and made sure to secure exactly what we wanted. He has represented my company previously and when we needed a lawyer, it was no question – we phoned Matthew!" Tony
View More
Submit a Law Firm Client Review
California Criminal Appeals Lawyer Blog
More»
Contact Us