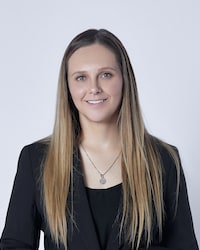 Kelsey E. Lewis earned a dual law (Juris Doctor) and Master of Social Work (MSW) degree from California Western School of Law and San Diego State University, respectively, in 2013. The same year she was admitted to the bar of the State of California, followed by the United States District Courts for the Southern and Central Districts of California in 2014. Thereafter, in 2016, she was admitted to practice in the United States District Court for the Western District of Pennsylvania, and subsequently, to the bar of the Commonwealth of Pennsylvania in 2017.

After several years working as a trial-level state and federal criminal defense attorney, Kelsey has since committed her practice to post-conviction and criminal appellate work. She is extensively experienced in criminal and quasi-criminal matters and is also formally trained and experienced in mitigation assessment, conducting biopsychosocial assessments and report writing, as well as trauma and emergency case management in the domestic violence setting. Kelsey has utilized these skills, in conjunction with her acclaimed legal writing and research skills, to her clients’ benefit and has a documented record of success in achieving favorable outcomes in criminal matters in various jurisdictions across the country. Kelsey has further served as a consultant in the legal and social work fields and has been a contributing author in various publications.