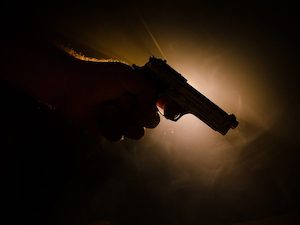 California has some of the strictest gun laws in the country. If you’ve been charged with illegal possession of a firearm, you need a criminal defense lawyer who understands California gun possession laws. The handgun ownership attorneys at Barhoma Law, P.C. have successfully represented many clients across the state facing the same situation.

The state of California treats unlawful gun possession harshly, but our team of legal professionals will work tirelessly to make sure your rights are protected. California’s gun laws are complicated and frequently changing, and, oftentimes, individuals aren’t even aware that they’re acting unlawfully.

We know how to build a strong defense for our clients, and we’ll dedicate ourselves to your case. Contact our Los Angeles gun possession attorneys today at (213) 800-7664 to schedule a meeting to discuss your case. The first consultation is completely free.

Why You Need a Lawyer for a Gun Possession Defense

Federal and state gun laws can be complex, and penalties may vary depending on your location when arrested, as well as whether you were in possession of illegal or stolen goods, or under the influence of alcohol or drugs. Every defendant has certain rights in an arrest, but police and prosecutors don’t always observe these rights, either due to carelessness or in pursuit of another conviction to add to their record.

An experienced gun possession attorney can make sure that you are afforded all the protections you are entitled to under the law. They can investigate the scene of the arrest, speak with witnesses, and negotiate with government lawyers to create a solid case for leniency or dismissal of the charges. A good lawyer can answer all your questions and keep you informed of the developments in your case.

The award-winning gun law attorneys at Barhoma Law, P.C. understand California and federal firearms legal defense strategy, and we have had many serious felony charges dismissed for clients facing penalties for firearms possession and assault with a deadly weapon. Barhoma Law, P.C. will thoroughly investigate the circumstances of your arrest and will aggressively work to get any illegal evidence suppressed and get the case dismissed, if possible.

We take pride in our ability to devote specialized attention and resources to each client that we serve. When you hire our firm, you bring in a top-notch team of advocates who will fight relentlessly to get the best possible resolution to your case.

In the State of California, most adults age 18 and older are allowed to possess a gun. Certain people are prohibited from owning a gun. These include:

California red flag laws allow coworkers, neighbors, and others to seek restraining orders that would remove an individual’s ability to possess a weapon.

California Penal Codes 26150 and 26155 permit carry of a concealed pistol, revolver, or other firearm for those who hold the appropriate license. In order to carry a weapon concealed on their person, an individual must hold a CCW (Carry Concealed Weapons) license issued by a county sheriff or city police department.

You must show that you are of good moral character, that there is good cause for the license to be issued, that you’re a resident of the locality in which you’ve applied for the license, and that you’ve completed required firearms training.

Your Rights in a Gun Possession Arrest

If you aren’t read these rights, your lawyer can ask that any statements you made be ignored by the court. You must assert your right to remain silent if questioned, however. If you volunteer information, it can be used against you.

The police must follow strict rules in these cases, however, and any evidence they find upon breaking these rules can be thrown out of court. Police often do not meet these high standards, and it’s very important to have a lawyer that will hold them accountable when they break the rules.

If you’ve been arrested for unlawful possession of a firearm, you may have many questions. While your attorney is the most reliable source for information about your own case, here are a few answers to questions that defendants frequently have about gun laws.

Does My Criminal Record Prohibit Me From Possessing or Owning a Firearm?

If you’re unsure whether your record in the State of California disqualifies you from gun ownership, you can request a Personal Firearms Eligibility Check (PFEC) by submitting a PFEC application to the Department of Justice. It’s important to note that this check will not tell you whether Federal law prohibits you from owning a firearm, only whether you’re eligible under California law.

What are Castle and Stand Your Ground Laws, and How Do They Work in California?

California law follows the Castle doctrine, which allows a homeowner to use deadly force inside their own residence to protect their home from an intruder. California does not have a Stand Your Ground law, which allows a person to use deadly force to protect themselves outside of that person’s property. In this state, the right of a person to use force against an intruder ends when that intruder no longer presents a threat.

Can I Bring a Firearm Across State Lines Into California?

In order to bring a gun bought or obtained out of state into California, you must ship the weapon directly to a licensed gun dealer. The dealer must then follow procedures for in-state transactions. You must submit to a criminal background check, a ten-day waiting period, and show a firearms safety certificate. There are a few exceptions to this rule, for certain owners with a record of sale from a dealer and some adults who have inherited their guns from a family member.

What is the Law With Regard to Household Gun Safety?

It’s a crime in California to store a loaded gun on your property if a minor could get access to it without parental permission. Whether you simply stored the gun carelessly, a child took it out and threatened or hurt someone with it, or they killed or seriously injured someone, you could face serious penalties, ranging from a misdemeanor with a $1,000 fine to a felony with up to three years in jail and a $10,000 fine.

California requires all firearms sold in the state to include a safety device, such as a trigger lock or cable lock, or proof that the purchaser owns a gun safe. These devices are only as secure as the precautions taken to protect the key or combination, however. It’s recommended that any gun owner train children in the household on gun safety protocols.

What are Some Possible Defenses for Gun Possession?

There are a number of arguments an attorney can make use of in your defense against illegal weapons charges, including:

The defense strategies your attorney uses will depend heavily on the particular circumstances of your case and how you were treated during and after your arrest.

If you or a loved one has been arrested for a gun possession crime, contact our Los Angeles criminal defense attorney at Barhoma Law, P.C. as soon as possible. Whether the charges involve a misdemeanor or are related to a more serious charge, we can make sure that police and prosecutors treat you appropriately and that you are afforded all legal and constitutional protections.

Facing a gun possession charge can be a stressful and difficult situation, but you don’t have to go through this alone. Call us at (213) 800-7664 or fill out our contact form today to schedule a free consultation.