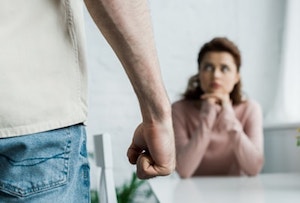 A charge of domestic violence will be taken extremely seriously by the Los Angeles court system.

Whether or not you believe you are innocent of the charge, the police and prosecutor will treat the matter as if you may have committed abuse against an intimate partner.

You need to take the charge very seriously too, by preparing the strongest defense possible.

As experienced Los Angeles domestic violence attorneys, Barhoma Law can help you build a case aimed at either getting the charges dropped, proving your innocence, or limiting the consequences.

You may be facing a lifelong criminal record and possible jail time for a domestic violence conviction in Los Angeles.

What is Domestic Violence in California?

Domestic violence laws in California are laid out in the California Penal Code 13700.

Under these laws, domestic violence is defined as:

“abuse committed against an adult or a minor who is a spouse, former spouse, cohabitant, former cohabitant, or person with whom the suspect has had a child or is having or has had a dating or engagement relationship.”

A person is considered to have committed “abuse” when he or she is found to have “intentionally or recklessly” caused or attempted to cause injury or placed another person “in reasonable apprehension of imminent serious bodily injury to himself or herself, or another.”

Domestic violence covers a range of crimes against an intimate partner, including:

Depending on the nature of the domestic violence offense, it may be treated as a felony or a misdemeanor.

What are the Consequences of a Domestic Violence Conviction in California?

If you are convicted of domestic violence in California, you can expect serious immediate and longer-term consequences.

Even for a first misdemeanor offence, a conviction can lead to:

Convictions for more serious offences will carry longer jail terms of up to four years, even for first-time offenders.

The longer-term consequences of a criminal record in California can be even more restrictive.

A conviction will remain on your record for at least 10 years. Even then, it will only be expunged or sealed if you are successful with your petition.

If the court does not delete the record, the conviction will remain on your criminal record permanently.

Future employers will be able to access this information, and it may have an impact on immigration status or freedom to travel to some countries.

In some circumstances, you may be eligible for probation (with restrictions and conditions) for a domestic violence conviction.

This may apply if:

What is a Domestic Violence Restraining Order?

If you are accused of domestic violence, the alleged victim can apply for an emergency restraining order (or “protective order”) against you.

This applies even if no physical injury has occurred. The conditions apply nationwide and will be enforced by police.

Both civil and criminal courts are able to issue a restraining order, placing additional restrictions on you and your movements.

Violation of a domestic violence restraining order can result in another misdemeanor charge (or worse, if the alleged victim was injured)

What Can a Domestic Violence Restraining Order Do?

A domestic violence restraining order can forbid you to:

You may also be ordered to:

What Can a Domestic Violence Restraining Order NOT Do?

It is possible for a domestic violence charge to be wrongfully applied against you.

Whether or not you believe you are innocent, resist the temptation to say anything to the police if you are charged. It may damage your defense.

Contact Barhoma Law immediately and we will guide you through the process.

Misunderstandings, false allegations, and police investigations that do not follow the correct process are common reasons for charges to be dropped.

There are several legitimate defenses to domestic violence charges:

If you have been charged with a domestic violence offense, we may be able to negotiate with the prosecutor.

We have a good track record of getting charges dropped, negotiating favorable outcomes via plea bargains, and defending clients vigorously in court.

With experienced legal representation, you may be able to escape a criminal record and the worst consequences.

We are adept at reducing the impact of domestic violence charges and providing a chance for our clients to rebuild their lives.

Start with an initial consultation so that we can evaluate your case and guide you on the steps forward.