Sadly, the United States Supreme Court lost Justice Ruth Bader Ginsburg after serving on the Court since 1993. The loss of Justice Ginsburg is a tragedy in many respects. However, in terms of her efforts to make the criminal law fairer for all defendants, her work will especially be missed. Ruth Bader Ginsburg was not a criminal defense attorney by trade. However, she was stalwart in her belief that the laws of the United States — especially for those facing serious crimes such as California homicide offenses — should be fair for all. These beliefs led most to consider her the most defendant-friendly justice on the Court.

The U.S. Supreme Court consists of nine justices. With Justice Ginsburg’s passing, the Court will now consist of eight justices until a new justice is confirmed. With Justice Ginsburg no longer a part of the court, legal commentators are questioning how the Court will rule on several important issues. For example, the following are issues that are either in front of the Court this term, or may come up in future terms. 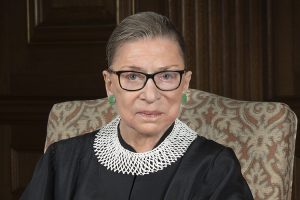 Life without the possibility of parole for children:

Coming up on November 3, 2020, the Court is scheduled to hear argument in the case, Jones v. Mississippi. In that case, the question for the court involves how lower courts should interpret the Court’s decision in Montgomery v. Louisiana. Specifically, the effect that a judge must give a defendant’s history of abuse during their childhood.

In Montgomery, the Court held that those serving life sentences for crimes that were committed when the defendants were children deserve the opportunity to show that the crime resulted from their immaturity – rather than evidence of irreparable evil. However, with Justice Ginsburg no longer a part of the Court, some legal commentators suspect that the now more conservative Court may reverse its more liberal approach to life sentences for child offenders.

The right to a jury determination of aggravating circumstances in a capital murder trial:

Justice Ginsburg authored one of the most important opinions in death-penalty jurisprudence; Ring v. Arizona. In that case, the Court held that a criminal defendant facing the death penalty has a right to have a jury determine whether the prosecution established the existence of one or more aggravating circumstances. This is crucial because, post-Ring, a defendant can only be sentenced to death if the jury finds that an aggravating circumstance exists and outweighs any mitigating circumstances. However, given Justice Ginsburg’s death, the future of this holding, as well as many others, comes into question.

If you are currently serving a life sentence for a serious crime, contact the dedicated California post-conviction attorneys at Barhoma Law. At Barhoma Law, Attorney Matthew Barhoma offers clients unrivaled dedication to their appellate and post-conviction matters. He has successfully handled all types of issues on appeal and in the post-conviction process, including issues involving AB 2942, SB 1437, Prop 57, as well as writs of habeas corpus. To learn more, and to schedule a free consultation with Attorney Barhoma, call 213-800-7664 today.