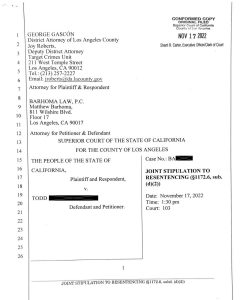 Barhoma Law, P.C. entered into a stipulation with the Los Angeles District Attorneys office to resentence client. Client will be home for the holidays.

The Barhoma Law, P.C. attorneys and staff are celebrating another major win for their client! Another Barhoma Law, P.C. Client is resentenced and will be home for the holidays after the firm successfully reached a stipulation with the Los Angeles District Attorney’s Office pursuant to Penal Code § 1172.6. The Los Angeles County Court reviewed the joint stipulation and signed off on it by vacating the client’s conviction.

The case revolved around Penal Code § 1172.6, which modified the law regarding murder and attempted murder. The client’s case was reviewed and it was determined his case qualified under SB 775 and Penal Code § 1172.6. Once a petition was brought, the firm’s attorneys were able to establish a Prima Facie showing that the client is entitled to resentencing. Barhoma Law, P.C. attorneys represented the client in court. They argued that not only is he entitled to resentencing, but that the conviction should be vacated in its entirety, as the conviction cannot be upheld under current laws. The Los Angeles District Attorney’s office ultimately agreed and entered into a joint stipulation with Barhoma Law, P.C. to resentence the client and to vacate his conviction.

In summary, the attorneys argued that the client had no intent to cause any attempted murder or murder, nor did he act with reckless indifference to human life, despite still being convicted of attempted murder. Under the new sentence, the client is made free and will be home for the holidays.

Winning an SB 1437 requires skill and adequate strategy from an experienced post-conviction and criminal appeals attorney. Our appeals team reviews cases in search for the truth. Consult with the leading appellate and post-conviction law firm in California by submitting a contact form or by direct call to our firm at 213-800-7664.