California Lawmakers Pass AB 256, an Effort to Reduce the Racial Disparity of the Criminal Justice System

It’s beyond argument that the criminal justice system has a very unfortunate history of being applied in a racially discriminatory manner. In fact, according to the Public Policy Institute of California, Black and hispanic men are imprisoned at ten times the rate of white men. Finally, after decades of turning a blind eye to this injustice, California lawmakers have started to make meaningful strides towards a more racially just justice system with the passage of Assembly Bill 256 (“AB 256”).

END_OF_DOCUMENT_TOKEN_TO_BE_REPLACED

Barhoma Law, P.C., a California Criminal Appeals law firm, has been following Senate Bill 775 closely. Senate Bill 775 passed the senate and the assembly this month, on September 10, 2021. It has been passed off to Governor Newsom for final signature. If signed, this bill will help reduce the sentence of those convicted of attempted murder and manslaughter, if they meet the SB 775 criteria.

Most notably, SB 775 is retroactive, meaning, you can apply this new law to your case, despite your case being final. Previously, SB 1437 changed the felony murder rule. Under SB 1437, those convicted under the natural and probable consequences doctrine were able to petition the court to re-examine their case. More specifically, per SB 1437, if an accused did not: (1) act with reckless indifference to human life, or (2) was not a major participant to homicide, they were able to petition for re-sentencing. Attorney Matthew Barhoma, founder of Barhoma Law, P.C. was successful multiple times under this law, giving back his clients a second chance at life.

However, SB 1437 only applied to those convicted of homicide. As such, it did not apply to those convicted of lesser offenses, such as attempted murder or manslaughter. Even worse, the SB 1437 criteria left out those who were facing homicide charges, but decided to comply with the District Attorney’s office during their prosecution by accepting a plea deal for a lesser offense.

END_OF_DOCUMENT_TOKEN_TO_BE_REPLACED 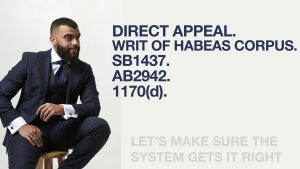