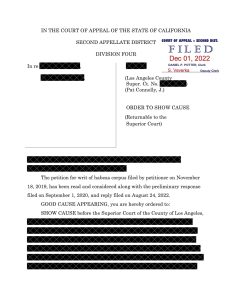 California Court of Appeals rules for Barhoma Law client after the firm successfully brought a Writ of Habeas Corpus. The Appellate Court remnded the case back to the Superior Court for an evidentiary hearing.

Barhoma Law, P.C. successfully argued a client’s case in the California Appellate Court, Second District, forcing the case back to the Los Angeles County Superior Court for an evidentiary hearing.

On December 1, 2022, after nearly 20 months of review, the California Appellate Court, Second District issued an order in a Barhoma Law, P.C., case that involved a client who was deprived of their right to effective counsel. Even worse, at the trial level, the Client’s former attorney did not properly object to the admission of contents of the client’s cell phone that was obtained from a warrantless search pursuant to Penal Code § 1538.5 and Riley v. California (2014) 573 U.S. 373.

Ineffective Assistance of Counsel is a claim brought about by way of a Writ of Habeas Corpus or in a direct appeal. If successful, the claim can overturn criminal convictions. To successfully prove ineffective assistance of counsel, an accused must demonstrate:

The Barhoma Law, P.C. client brought a pro per Writ of Habeas Corpus  at the trial level seeking the ineffective assistance of counsel and counsel’s failure to object to the admission of evidence otherwise deemed the “fruit of the poisonous tree.” The trial court wrongfully denied his claim without a hearing. Barhoma Law, P.C. reviewed the client’s case and brought an appellate Writ of Habeas Corpus to the California Court of Appeals, Second District, in attempt to shed light on the merits of his claim. The Barhoma Law, P.C. attorneys argued that the client’s case likely suffers from ineffective assistance of counsel and prosecutorial misconduct. Furthermore, the Barhoma Law, P.C. team also argued that the client was entitled to an evidentiary hearing.

After all briefs were finalized in the appellate Writ of Habeas Corpus, the Second District Court of Appeals agreed with Barhoma Law, P.C. and remanded the case back down to the lower court for an evidentiary hearing. In ruling for the Barhoma Law, P.C. client, the Appellate Court held:

The clerk of this court is directed to send the superior court a copy of the petition with exhibits, along with the preliminary response and reply, and to serve it with this order to show cause. Upon receipt, the superior court is directed to file the petition in that court, set a briefing schedule for the parties, and set a hearing to determine whether petitioner’s trial counsel was ineffective and whether there was a reasonable probability that but for counsel’s unprofessional efforts, the result of petitioner’s trial would have been different.

How a California Criminal Appeals Lawyer Can Help

Barhoma Law, P.C. is one of the top criminal appeals firm in California. We review cases in search for the truth. Successfully appealing your case requires extensive experience in appealing cases and successfully bringing matters to a higher court’s attention. If you or a loved think you may be entitled to appeal a lower court’s ruling due to procedural defects or possibly wrongful conviction, consult with a Barhoma Law, P.C. lawyer by calling 213-800-7664. Or you can submit a contact submission.