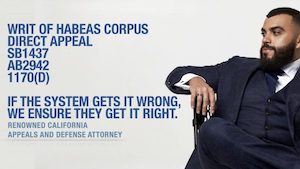 Traditionally, California has taken a hard stance on crime. This has led to mass incarceration and overcrowding of state prisons. However, there came a point when state officials agreed that California was imposing unnecessarily long and punitive sentences. Specifically, when AB 2942 was codified, the law indicated “[w]hen a sentence includes incarceration, this purpose is best served by terms that are proportionate to the seriousness of the offense with provision for uniformity in the sentences of offenders committing the same offense under similar circumstances.” – California Penal Code Section 1170(a)(1).

AB 2942 went into effect in January of 2019. With this law, California ensured a broader process for reviewing and recalling a defendant’s sentence, depending on their eligibility. As such, if you or a loved one are serving an unnecessarily long prison term, you should consult with an attorney to determine whether you qualify for AB 2942 relief. If you can demonstrate that you have been rehabilitated and are able to re-enter everyday society, then AB 2942 may be able to grant you early release and a reduction of your sentence.

Now, pursuant to AB 2942, District Attorneys have the ability to reevaluate past sentences. Assuming you meet the criteria below, the DA has an opportunity to determine whether the length of the sentence no longer serves the interests of justice. And assuming your attorney can help negotiate that, the prosecutor may request and support your re-sentencing. This is generally pursued in the same county where an inmate was convicted and sentenced. The court will then have an opportunity to look into the facts and deny or allow the request.

Once a prosecutor recommends your re-sentence, along with the aid of your lawyer, the court will make a determination call. Assuming the court agrees to re-sentence, it will hold a re-sentencing hearing. And in this sentencing hearing, the court will impose a new sentence, which may account for time served. At no point will the court impose a lengthier sentence than the one already imposed, as that would defeat the legislative purpose of AB 2942. The hearing is governed by the Judicial Council sentencing rule to mitigate the risk of discrepancies among sentencing.

Factors the Court Considers for a Recall

To determine your relief, courts are given a wide range of authority to look at an array of different factors. Generally, courts consider the following factors in making a decision:

Who Has the Authority to Seek Sentence Recalls: Board of Parole, District Attorneys, and CDCR

As discussed at length above, you can make a recommendation to the DA’s office, who can seek to recall your sentence. But just as important is why the California legislature made it so District Attorneys have this authority. This is due to the fact that prosecutors are working the front lines of the criminal system daily. They are hyper aware of the complexity of sentencing laws and the new laws that may impose shorter sentences for the crime you’ve been convicted of committing. Prosecutors are also aware of studies that show how ineffective lengthy sentences are to an inmate’s overall life.

This puts you and the DA on the same side, which makes for an amazing tool. It’s when the system works together. Prosecutors are equally in a good position to identify when an inmate has been rehabilitated or shows great signs of reduced future violence.

The Parole Board for state prison inmates, the county of correctional administrators, and the secretary of the California Department of Corrections and Rehabilitation (CDCR) can also recommend to the court that your sentence be reduced. They are also great facilitators of this, as they have the direct records and standing to show you meet the criteria of AB 2942. In our experience at Barhoma Law, P.C., when you get one of those agencies to recommend your release, you maximize your likelihood of success under AB 2942.

Ways to Maximize Your Petition’s Chances for Success

You can maximize your likelihood of success of AB 2942 relief by petitioning CDCR. In 2018, the governor instructed CDCR to receive petitions from inmates who believed they deserve to be re-sentenced based on good conduct while incarcerated or disproportionate punishment for their offense.

At Barhoma Law, P.C., we do this by preparing a strong character packet. In our experience, the petitions with the highest likelihood of success are the ones that have strong character references. For instance, a character packet that includes a resume of achievements earned while in prison (e.g., certificates, classes and programs attended, etc.) is stronger than one that does not. Further, showing direct rehabilitation through those items is powerful. For instance, if you are in prison on a firearm possession conviction, good direct rehabilitation is taking gangs, violence, or firearm classes. Mentoring other youth inmates and new inmates is a positive indicator that you show a likelihood that you can re-enter society. Lastly, strong reference letters from friends, family, and prior mentors also serve to maximize the likelihood of success. And one of the strongest pieces to include is a reference letter from a CDCR guard who has direct information on your character while in custody.

If you wish to petition CDCR, you should work closely with a post-conviction lawyer. Experienced lawyers bring confidence to your petition and do the necessary diligence to strengthen your petition and maximize your likelihood of success.

If you fall under a special category of 1170(d)(2), you can petition the court. If a defendant: (1) was younger than 18-years-old at the time of the offense, (2) sentenced to life without the possibility of parole, and (3) they served at least 15 years of their sentence, they can seek a petition pursuant to Penal Code § 1170(d)(2). This must be filed with the original court that handed down the sentence. And in doing that, you must also serve the prosecutor with your petition.

The petition should include a statement that you were under 18 at the time of the crime, and that you were sentenced to life without parole. Then, you should also include all the ways you meet the AB 2942 factors (e.g., rehabilitation, reduced risk of violence, etc.).

If you or a loved one have served a significant portion of a long sentence and believe you are entitled to relief, do not hesitate to reach out to Barhoma Law, P.C., We take a two-step approach to AB 2942. First, we do the necessary leg work to determine you are indeed eligible. During that initial phase, we collect all necessary data on your behalf (the certificates you’ve earned, reference letters, character building, etc.). Once we deem you eligible and determine there is a good likelihood of success, we proceed with finalizing your petition and submitting it to all the right agencies. You can contact us at (213) 800-7664 or on this website for a free consultation.